For Bob of Riding the Wet Coast

Bob - To clarify the location of the Maine hood ornament: 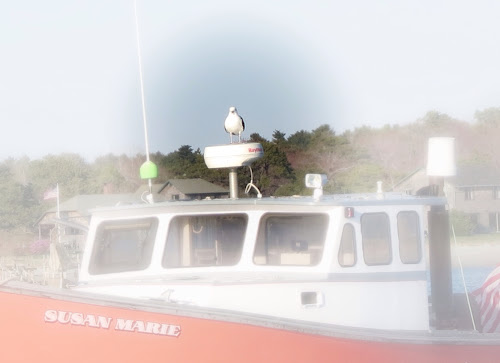 Many Mainers drive junkers or beaters, especially is winter, and these cars are often so old that they still have the hood ornaments common on automobiles of the 60s and 70s. And fishing boats are seldom seen without at least one sea gull perched on the radar, or some other high spot.

I don't have a photo of Mike and his new Piaggio BV Tourer 250. But here is a picture of my beautiful niece Leaha with her boyfriend Eric at a Sea Dogs game. 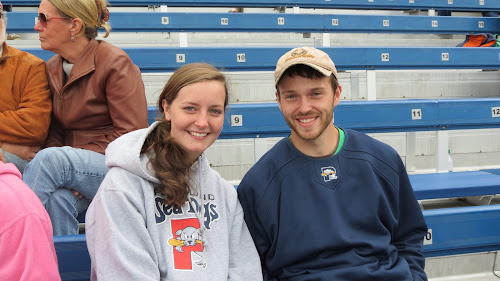 Both of these young people are far better looking than Mike, so I expect I won't need to take a photo of my scootering companion.

Posted with Blogsy
Posted by Thomas Keene at 5:02 PM 4 comments:

We are NOT lost!

Here is the trip, as we rode it, and as Mike intended: 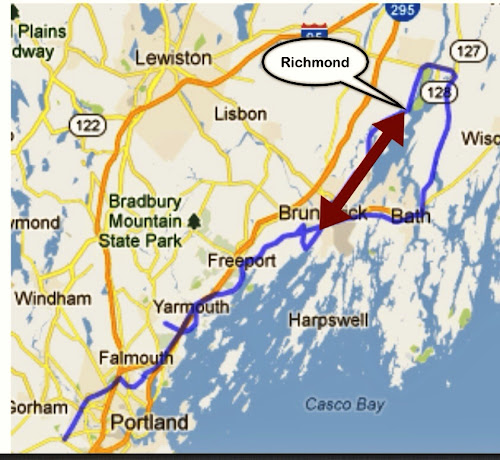 Along the way, we saw one of the several secret gardens where fishermen and sailors grow buoys to mark their anchorages. 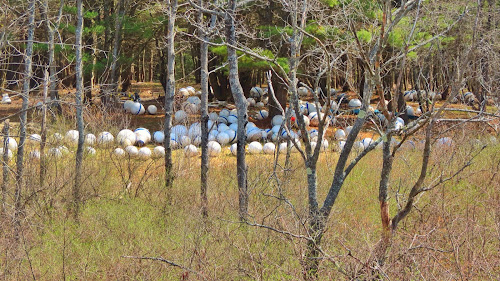 Here are buoys in their natural habitant. 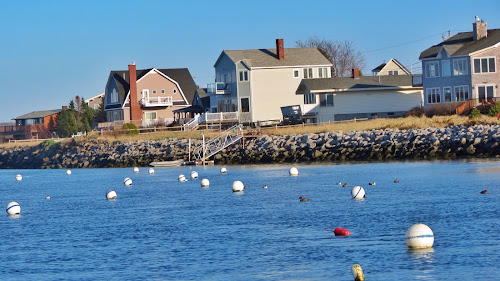 After over an hour of what Mike thought was wandering, we stopped and he expressed his opinion of my navigational skills. Look to your left, Mike! 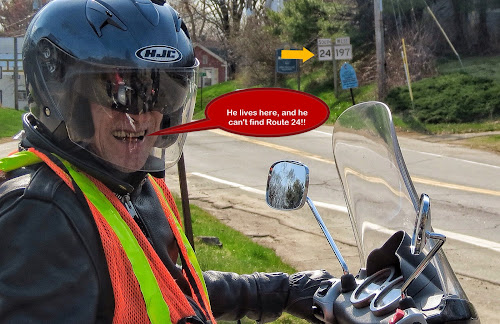 A fishing boat with the obligatory Maine hood ornament 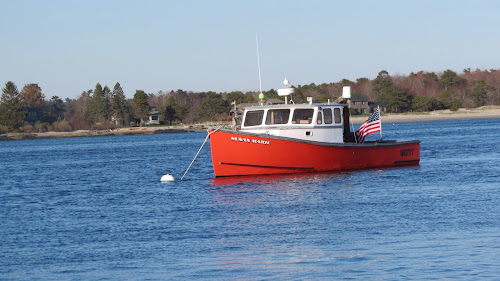 Posted with Blogsy
Posted by Thomas Keene at 7:08 PM 12 comments:

Before another month flies by, I should let people know where I've been. Well, it's simple - baseball is back and I'm feeding my obsession.

Right now, I'm listening to a Portland Sea Dogs game on radio and watching the Tigers play the Indians. Earlier today, I watched the Reds and the Brewers and the Cubs at the Nationals. And in an hour, I'll be watching Oakland at Seattle.

After Spring Training games began in February, I watched 72 games - so far, I've watched nearly 80 regular season games on the MLB AtBat iPad app. In addition, I've been to 16 Sea Dogs home games and have listened to all 17 road games on radio.

But riding my Vespa 250 is still a major part of my happy retired life. Between my solo trips and rides with Mike, I've ridden just over 700 miles. And I missed 10 days on the road while the scooter waited for a new exhaust gasket to arrive from the West Coast. The Vespa sounded about a third as loud as a Harley, and that and the fact the riding could cause damage ($$$$) led me to huddle at home with my iPad, scoring app and a case of Diet Moxie (and some chips, maybe a Cheese Doodle or two, some Chinese take-out...).

Watching a baseball game is something so wonderful to me that I can't really describe it, and I won't even try. Either one understands, or one does not.

A few photos from Hadlock Field, home of the Red Sox' Double A team: 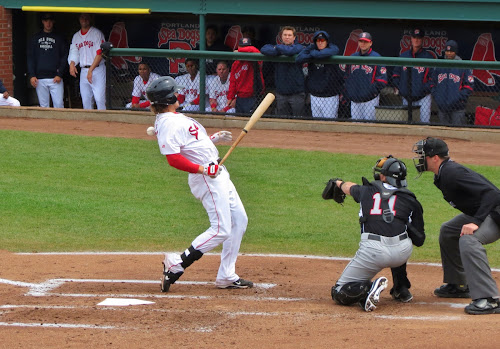 Right fielder Peter Hissey takes a pitch in the back 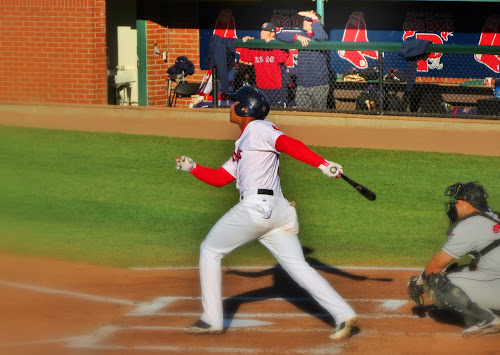 If this superb shortstop isn't playing in Boston very soon, I'll eat my hat. (Fortunately, I keep an edible hat on hand for just such occasions) 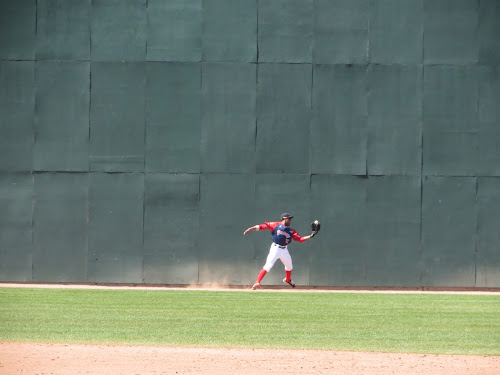 But Mike and I did ride a lot, and he is the proud owner of a new Piaggio BV 250 Tourer. One ride on a perfect day reminiscent of mid-summer was a trip around Sebago Lake. 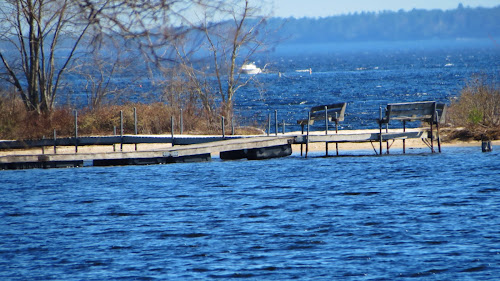 We stopped at Sebago Cove, which is next to Trickey Pond in Casco. Beyond the dock is what we call "The Big Lake." 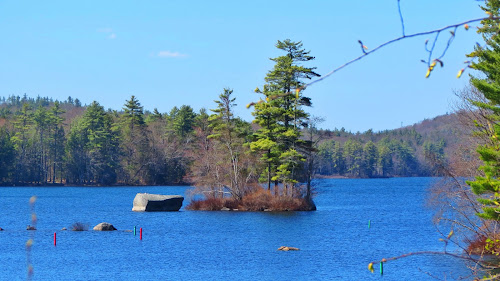 And I'm sure this little island has a name - something typical of the pragmatic Mainer, like "Little forest next to big rock" 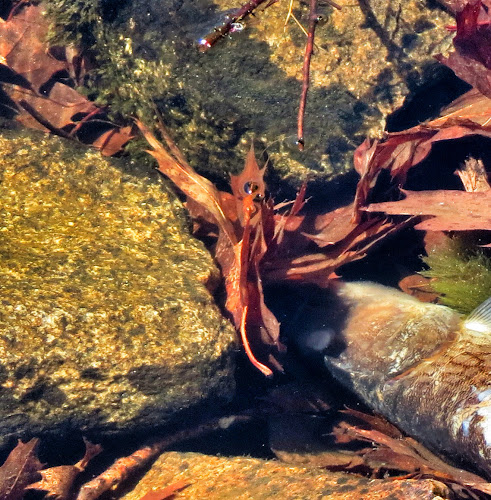 Mike noticed this deceased fish by the shore - note how clear and clean the water is! - and asked "What kind of fish is that?"

"Pickerel," I guessed, knowing Mike-the-city-boy wouldn't know if I was right or wrong.

"Is pickerel a good fish to eat?" he asked.

We rode away, and Mike asked no more culinary questions. 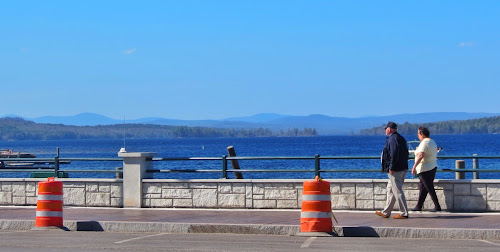 Our next stop was in Naples, with a great view of the mountains of New Hampshire beyond Long Lake, so named by pragmatic Mainers because it is ... long.

Oakland leads Seattle 1-0 in the second - time to go

Posted with Blogsy
Posted by Thomas Keene at 9:36 PM 10 comments: