To keep this a family-friendly scooter blog, I ask readers to read between the lines in the account below. I think the male scooterists will understand right away, for surely we've all had our manhood questioned as we ride scooters on roads dominated by big bikes. 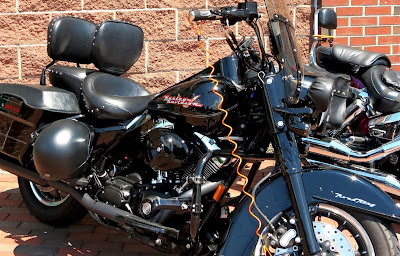 ...but a Harley much like it that approached on my right as I waited for a notoriously long red light to change to green. Astride the big bike was a large, scruffy, big-bellied man wearing shorts and a faded T-shirt that barely covered his bulging gut. Stopping his loutishly loud Hog next to me, he glared with disdain at my neat, clean, quietly purring Vespa GTS 250.

First, he sneered with disgust as he pointed at my Vespa, then turned up his mouth in a nearly toothless grin, and laughed hard, lifting his fat, bearded face toward heaven, and shook his head so hard that the hankie covering his huge bald skull fell off.

Revving his Harley to space shuttle liftoff decibel levels, he patted his gas tank lovingly, and roared at me:

"Wouldn't you really rather have one of these?" 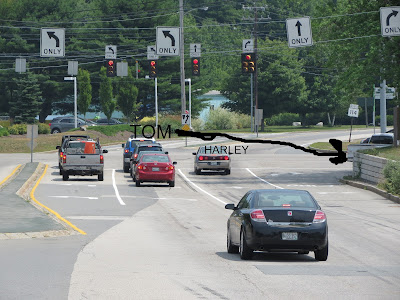 Here's the layout of the encounter, with my escape route indicated by the arrow.

(This is where it gets linguistically tricky.)

"No." I replied truthfully, after the din died down. "I am a more than adequately equipped man. I have no need to compensate mechanically."

You get the idea. Using my cruder words, hankie-headed Harley man understood.

Follow the arrow - I made an illegal right turn against a red light to escape the now red-faced, roaring blimp-on-a-bike. Doubling the 25 mph speed limit, I didn't look back.

I didn't want to become a headline obituary:

When Mike and I took a really memorable ride a while ago, we found ourselves at the end of a dead end road, complete with very large barking dog straining at its rope, with lunch on his mind. 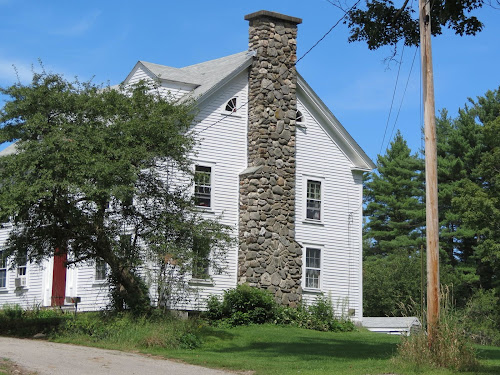 The house we saw, guarded by an unseen but obviously vicious and hungry canine, was fairly typical of the area. 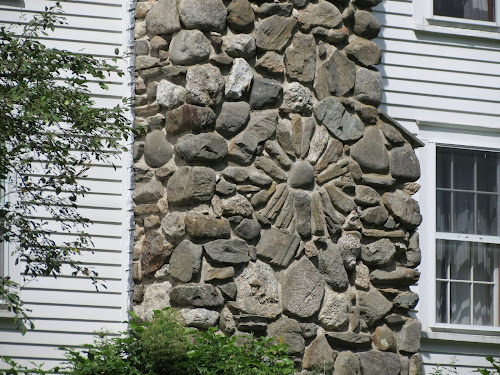 What made it notable was the artistry at the base of the chimney. "I wonder where the people are who do this kind of work?" I asked Mike. 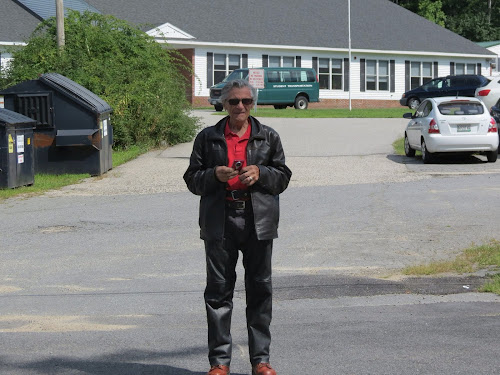 We stopped at a library Mike had found in his research for this ride, and we did what we are driven to do every time we ride together. Mike has just taken his photo of me as I wait for the little blue and green frames in my new camera to tell me something in the viewfinder is probably in focus. 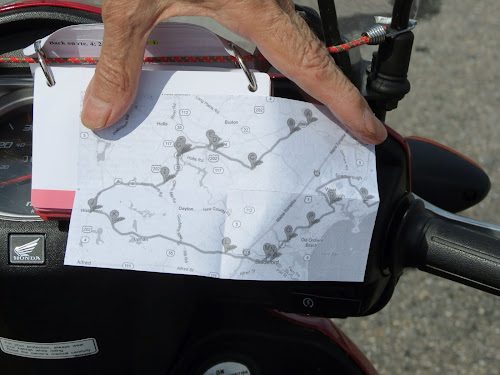 Speaking of research, this is what Mike prepares every time we travel: First, the map ... 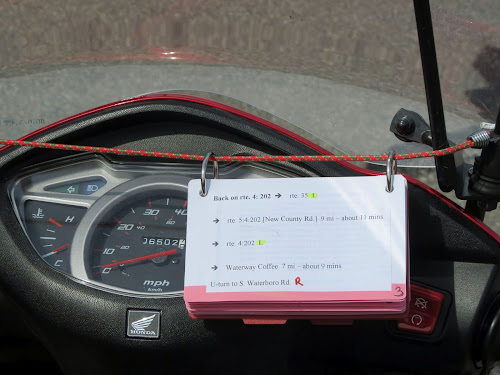 ... then the directions, printed on file cards and mounted on his Honda Elite. 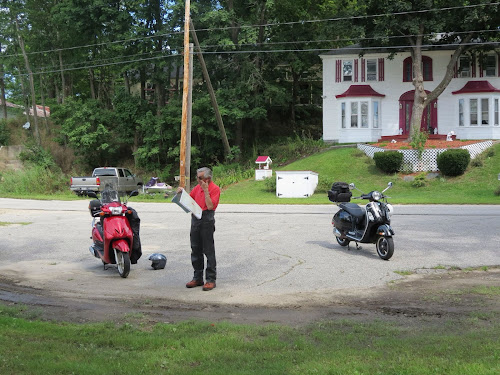 Even with all this, plus Mike's GPS phone - I have always managed to take a wrong turn. If I'm riding in front I go left, or south, or up, when I should have gone right, or north, or down. Then Mike hauls out the Big Book of Maps, and brings us back on course. 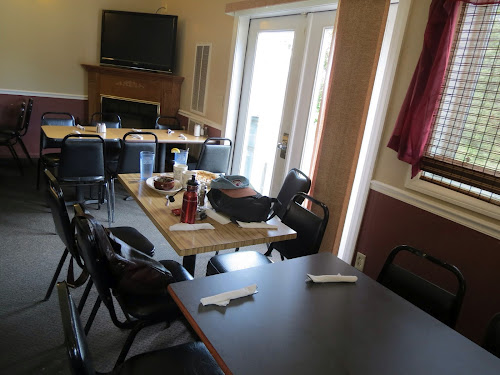 On this ride, our lunch destination was the Stationhouse Grill, where I ate too much - again. We had a perfect day for scootering. My wrong turn led us to what a local resident called "the last unpaved road in Berwick." (I thought we were in Standish - see, that's how it goes!)

Posted with Blogsy
Posted by Thomas Keene at 9:34 PM 14 comments:

If time flies when you're having fun, it goes supersonic when you're in seventh heaven! And since the middle of July, that's where I have been. Here I am at "work" with Slugger, the Sea Dogs mascot: 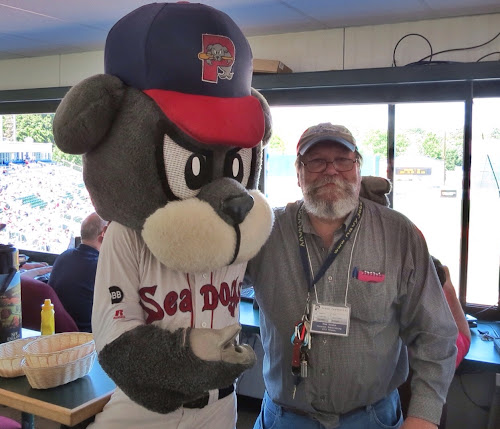 I may have mentioned that I love baseball. That is an understatement. I am addicted to the game, obsessed with it, consumed and absorbed by every little thing about the game of baseball.

And that has led me to set aside scooting - well, actually - everything that isn't baseball, at least for awhile.This all started when I was five years old, so it's not going away any time soon.

Please don't judge me too harshly - but I watch as many as six baseball games a day. When the Dogs are in town, I attend most games, but I take in as many of the Major League games on the MLB At Bat app as possible. 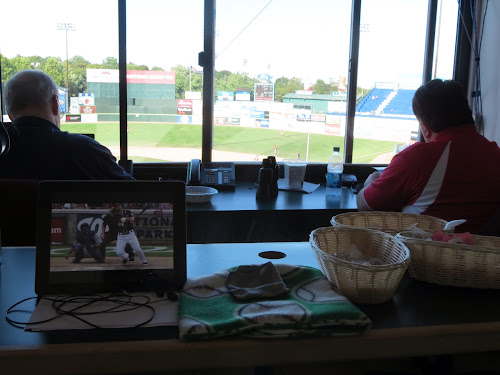 This may not be normal. I am one of the few people around who goes to baseball games and watches another game - or two or three - on an iPad.

Well, the Sea Dogs season ended yesterday, so I'll begin to lead a more normal life. But I'll miss things like the Dogs annual "Field of Dreams" game, in which the team emerges from a center field corn field, in the manner of the icon movie. 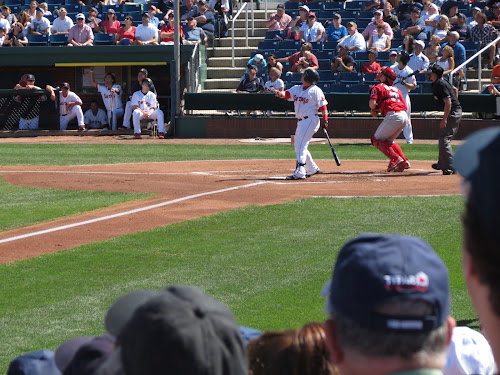 This ball curved foul at the last moment. But next pitch brought home a run, giving Portland an early and temporary lead in their final game.

Posted with Blogsy
Posted by Thomas Keene at 7:43 AM 4 comments: